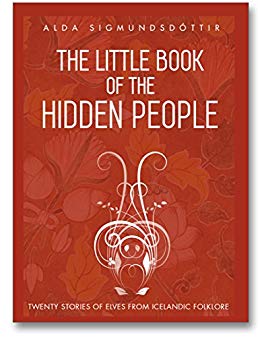 Contribute monthly via Patreon (which includes perks), make a one-time donation through Paypal, or buy us a coffee. I’ve been posting notes about my research all month long on Patreon.

This is a relatively short (111 pages) book about a group of relatively unknown mythological and legendary figures – the elves (álfar) or “hidden folk” ( huldufólk) of Iceland. People who write about the Icelandic hidden people tend to do so from two perspectives – either belief in their actual existence or belief in them as a metaphor for the extreme isolation and privation in which most Icelanders lived for their millennium-plus existence. The estimate of how many Icelanders still believe in the actual existence of hidden people varies on which side of the spectrum an author lies. This author spends the bulk of her introduction insisting that this is an outmoded belief amongst Icelanders today, thus obliquely proving the above point.

Whether in the literal or the metaphorical/psychological sense, Icelandic elves are deeply fascinating, underexposed as a mythology in the speculative genres, and pretty friggin’ scary. Imagine a large island the size of New York State, but with less than two percent of the population, one with white nights in summer and long, frozen, dark winters, with the not-so-occasional volcanic eruption. One not anywhere close to anywhere else.

Now imagine mentally populating it in your folklore with a far-more-numerous race of prosperous, beautiful, strong, lucky, deadly, invisible shadow people. Who will probably kill you if they realize you can see them and totally mess with you whenever you can’t.

That’s what the Icelanders did, first the Norse settlers (calling them álfar) and then their Irish slaves (who called them huldufólk). To the Norse, the hidden people were creepy and dirty and numerous and dangerous. To the Irish, they were an enviable, golden race. You can probably see some class issues creeping in along with the psychological issues involving populating an empty island with folkloric beings out of sheer collective loneliness.

These 20 stories are among the more famous (at least, for Icelanders) of the folk tales about Icelandic elves. Some of them are plays on biblical lore, such as “On the Origins of the Hidden People.” Here, the álfar are those of Eve’s children that she hid away from God when He came visiting (because she had so many that she couldn’t wash all their faces in time and was ashamed of them). God then says that what Eve hid from Him, He will hide from the world – hence, how these children became “hidden folk” ( huldufólk).

This is obviously a pejorative story, but it also reflects the Icelandic ideal of many (healthy and legitimate) children. For much of Icelandic history, the infant mortality rate was so high that people might have many children and be unable to raise any to adulthood (at one point, Iceland had the highest infant mortality rate in Europe). There was even a tradition of naming the first four sons after the father, with the hope that at least one of them would live to carry on his father’s name.

“The Elf Adornment” story is a whole other kettle of fish. In this extremely violent tale about the perils of dancing, a family goes off to evensong at church on New Year’s Eve, leaving behind a maid to tend the farm. Some hidden people show up and invite her to dance with them. After she happily accepts and goes off with them, they murder her and leave her on the threshhold.

Another New Year’s Eve, another maid. This time, the hidden people cut off her head and leave her in the doorway.

A third maid saves herself only by sitting resolutely at her sewing in the baðstofa (the main room of a traditional Icelandic turf house) until dawn. And dawn takes a mighty long time to come on New Year’s Eve in Iceland. Frightened off by her comment that the sun is rising, they leave, but they give her the treasure of the title for her bridal chest in admiration of her resolve.

There’s a lot to unpack here, not least the overt message not to go dancing because it led to illegitimate pregnancies the poor and stressed Icelandic communities couldn’t support. That’s much like the 1970s Mexican American trope of the Devil and the Dance Floor from Ghost Stories from the American South (which I reviewed early in October).

There’s another version involving a man where he’s much more active and has better luck, so it’s about gender roles, too. Men tend to have more luck in these stories with transgressive behavior, such as in “Snotra the Elf Woman,” where a guy stalks a selkie-like elf woman and inadvertently breaks a curse on her. He’s rewarded for his creepy behavior with good fortune after she thanks him and returns to her world under the sea.

Another wrinkle is that the hidden people are indistinguishable from regular humans and can even take the form of someone you know (and that there’s a whole genre of “outlaw” stories tied up with stories of elves). So, there’s no actual reason to believe the first two maids “The Elf Adornment” knew they were interacting with hidden people. Plus, there’s the whole serial killer vibe of murdering the servant stuck at home during church and leaving her on the threshold. You don’t mess with the álfar.

With so much mistaken identity in the folklore, it’s unsurprising that a story like “Father of Eighteen in the Elf World” involves the shifty old goat of the title changing places with a woman’s baby. The woman is smart and figures out what he did (in a way not unlike the Rumpelstiltskin tale), then proceeds to beat him. His wife then shows up and hands her back her baby.

Changeling stories always have some nasty subtext. You’re basically talking about a folkloric explanation for a colicky or sickly baby whose mother never bonds with it. In real life, such stories generally didn’t have happy endings.

Intimacy with a hidden person could be used as code for an illegitimate liaison, as in “The Girl in the Mountain Dairy.” The mountain dairy (sel) was where flocks were kept in summer and it always had a female keeper. The title character falls pregnant by a hidden man who woos her while she works the dairy. After she gives birth and the baby mysteriously disappears, she is forced to marry another (human) man, but there are tragic consequences when her elf husband and son return years later.

These stories reflect some harsh realities in Icelandic culture and history. Iceland was a hard place to live for a long time. It’s lovely to visit now, and the people there are wonderful, but I’m pretty glad I didn’t live there even a century ago.

6 thoughts on “Halloween in North Carolina, All Saints’ Day: Bonus Round #1: The Little Book of the Hidden People (2015)”