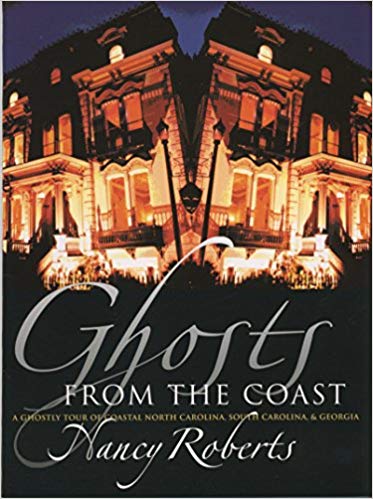 Contribute monthly via Patreon (which includes perks), make a one-time donation through Paypal, or buy us a coffee. I’ll be posting notes about my research all month long on Patreon.

Nancy Roberts (1924-2008) was known during her lifetime (at least, according to her Wikipedia page, which gives no source) as the “First Lady of American Folklore.” Good Lord, I hope not. If there’s anything Roberts wasn’t, it was a great folklorist, or any kind of folklorist, really. Basically, she was a journalist from North Carolina (albeit born in Milwaukee to Southern parents), who started writing articles about local ghost stories. After this caught a good readership, she graduated to books. She was certainly popular (since she’s still in print), but if she was a folklorist, I’m a stripper.

The book covers ghost stories and legends along the coastlines of three states, in order: North Carolina, South Carolina, and Georgia. Even I weren’t mainly looking for NC tales, I’d still judge the first section the best. There’s something about the Outer Banks that keeps Roberts (mostly) honest. The one about the lifeguard station is especially creepy and likely the best of the collection.

Roberts’ style is to take a story and then embellish it with imaginary conversations and such. She also makes up characters from whole cloth. This is common among NC storytellers, though they tend to do it the most with legends that may or may not have an historical basis. This wouldn’t be so bad if she weren’t so darned vague about things like dates and places, making everything (including events that really happened) sound as though they occurred somewhere long, long ago and far, far away. This has the tendency to uproot the stories from any realistic dirt and make them seem less scary. On top of that, whenever she is in a sharing mood with facts, she has a tendency to do long-winded “house tours” before she tells any ghost stories, which are then pretty perfunctory. Dull.

Not helping is that she tells some obvious porkies that are easily disproved. For example, Savannah didn’t exist until 1733, so the likelihood that Blackbeard (who died in 1718) frequented a tavern there is pretty low. She also repeats the tired old canard that Blackbeard was bloodthirsty and evil. Yet, historians these days aren’t sure if he ever killed anyone before his last battle, let alone a girlfriend who probably never even existed.

Roberts also has a tendency to romanticize Southern history (she buys the Lost Cause approach hook, line and sinker) and slut-shame any woman who doesn’t follow that rigid code. So, Roberts hints that the probably-apocryphal pirate moll Jenny had it coming for ditching the love a Good Man for the no-good Blackbeard.

Even worse, Roberts invents a poisonous cousin for poor Nell Cropsey, a real-life teenager who was murdered (probably by her boyfriend, Jim Wilcox) in Elizabeth City in 1901. As said cousin testifies at Wilcox’s trial, she has a purely invented internal monologue about how Nell kinda deserved getting her head bashed in and dumped in a canal for teasing Jim and being mean to him while preparing to dump him for the next thing to come along. Roberts even manages to twist it so that the cousin didn’t believe Jim did it, even as her thought process does a great job of giving him a strong motive. Ewwwww.

Overall, I found this collection unsatisfying. If the book’s Amazon and GoodReads reviews are any indication, I’m not alone. While a lot of ghost books are short, some pack more material into those pages than others. Ghosts from the Coast included an awful lot of boring fluff that either had little to do with the legend at hand or made stuff up from whole cloth out of badly researched history. Roberts’ writing style has not dated well. I’m also not too thrilled about the strange fact that despite there being at least two other major male NC writers in the 20th century, she was the only woman writing about the Carolinas legends at the time, with three new women folklorists popping up only after her death in 2008. Hmm.